Most of the Filipinos know Tagalog. The very one thing I failed to teach my children. But this works to our advantage for now because if there’s an urgent topic I want to discuss with my husband, speaking Tagalog comes in handy. Eventually, my children will learn how to speak our mother tongue thus, the reason for this tutorial.

(press the play button to listen)

Before we learn the Tagalog or the Filipino language, let us first know the meaning of “tagalog.”

The word Tagalog is derived from the endonym taga-ilog (“river dweller”)it is  composed of tagá- (“native of” or “from”) and ílog (“river”). Very little is known about the ancient history of the language.

Tagalog is classified as the language within the Austronesian language family. A composition of  Malayo-Polynesian, Malagasy, Javanese, Indonesian, Malay, Tetum of Timor, and Tao language of Taiwan. (reference: http://en.wikipedia.org/wiki/Tagalog_language)

Aside from these roots, the modern Tagalog language is also comprised of so many words  from the other languages. Since the Philippines have been colonized by countries such as the America and the Spain being the longest, our language has also evolved. We will encounter these words as we go along.

The evolution of the Filipino Alphabet

A long time ago, what the native Filipinos are using is what we call the “Baybayin” alphabet, it has been replaced by the “Latin” alphabet which is easier to read.

The Evolution of the Filipino Alphabet

The “Baybayin” Alphabet – Type of writing system: syllabic alphabet in which each consonant has an inherent vowel /a/. Other vowels are indicated either by separate letters, or by dots – a dot over a consonant changes the vowels to an /i/ or and /e/, while a dot under a consonant changes the vowel to /o/ or /u/.
The inherent vowel is muted by adding a + sign beneath a consonant. This innovation was introduced by the Spanish.
Direction of writing: left to right in horizontal lines (credits:http://www.omniglot.com/writing/tagalog.htm)

Later on, we adopted the English and some Spanish letters. 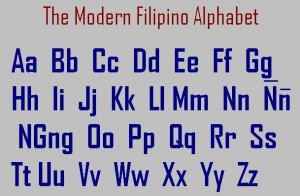 Since I already told you the history of the Tagalong language and the Filipino Alphabet, I would like to introduce you to our new tutorial – Tagalog 101: How To Speak The Modern the Tagalog language.  So welcome, and watch out for our next module: How to say “How are you” in Tagalog. Mabuhay! (Long live/cheers)