Skip to primary content
This is an honest and an unsolicited product review of Roohi Hair Solution.  Since it gave us a desirable result, we would like to make the public aware about it too. All of the thoughts expressed are of writer’s opinion only. To know more about the product, please call or message Dr. Talat Fatima at +6583955040. 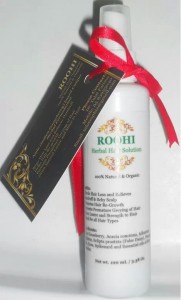 Roohi Herbal Hair Solution is a Back-to-Nature product that gives your hair the healthy and long life using all natural herbs.

A couple of months ago, I’ve started to try a new hair Product suggested by my wife, which she discovered from her friend.
Now, being a typical guy, I feel uneasy with  the thought of putting things in my hair, aside from the regular daily shampoo (and the occasional styling gels).
I’ve never really been very fussy with my hair, and I usually leave it just the way it is after a few strokes with a comb.  However, during that time I have noticed that I was having some dandruff problems and increased hair-fall.  Not sure if it was due to the stress at work, or maybe the humid weather, or if was simply “age” that’s starting to catch up with me.  And so I decided to try it out.
The name of this hair product is Roohi Hair Solution.
It is a spray-on hair growth product containing all natural herbs.  The main ingredient is the Indian Gooseberry (Amla) which is said to be also used in other successful hair-growth products.  It is also highly nutritious and is a dietary source of Vitamin C, minerals and amino acids.  Roohi comes in a 100ml spray-on bottles, which makes it very easy to apply in your scalp and hair.  And when applied to the scalp, it gives off a refreshing effect.  Since it is an all-natural solution, it is also better to keep it in a cool place (such as your fridge) to give it a longer shelf life.
Roohi is a product that I would recommend for men who are having hair-loss problems, but can also be used by women who would like to have a fuller volume of hair.  Aside from nourishing the scalp to promote growth of new hair, it helps to fight-off dandruff and also has the effect of giving your hair an even darker, more black color.  And since it is made from all-natural ingredients, it is safe for children and teens to use as well.
I have tried this product regularly for a couple of months and did see an improvement on my hair volume.  It has also definitely, removed any dandruff problems I had while I was using it (whether I was feeling stressed or not).  As for the darkening of the hair, I have not noticed this much as my hair is still pretty much black, although my father (who has tried it as well), did say that it has helped blacken his hair when he used it.  Friends and family who have also tried it, have advised different improvements of hair re-growth as well. One downside that we have noticed is that it has a distinct scent that may be strong to some.  This I believe is due to the concentration of the Gooseberry which is the main ingredient in this hair growth formula.  We once noticed from another hair-growth formula that it also uses this Indian Gooseberry, but it vaguely had that distinct scent.  We then found out from it’s ingredients that the Gooseberry was of a much lower concentration and was masked by artificial fragrances.
With pre-mature male balding happening commonly these days, I would still prefer to keep a nice mane as long as I can.  And with what I’m seeing and hearing so far, I would continue to use it as well.
Try it and see for yourself.